'THE APPLETON' - "One of Baltimore's Best Cherry Blossoms Photos &Articles"

By BY KEVIN RECTOR and THE BALTIMORE SUN 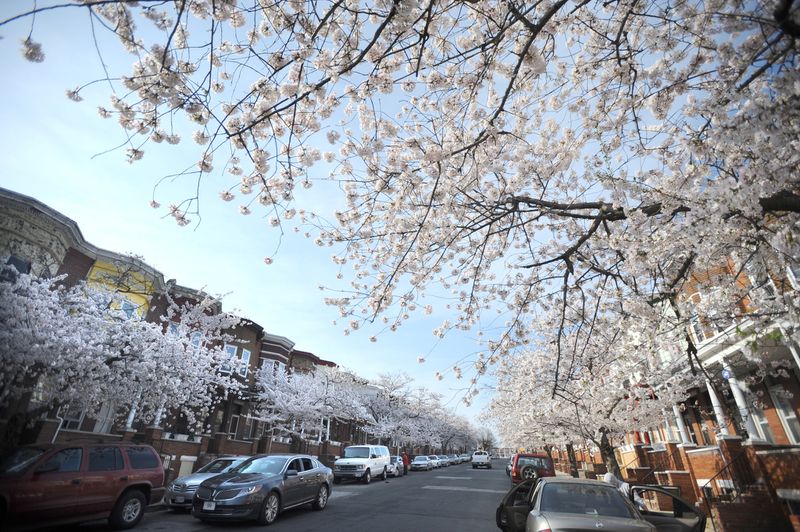 Cherry blossoms are in full bloom on the 1600 block of Appleton Street in West Baltimore. (Jerry Jackson, Baltimore Sun)

Tourists never come to see the cherry blossoms in West Baltimore, in the heart of what local residents warmly refer to as "the hood."

But they could, as far as Marvin "Doc" Cheatham is concerned.

"We could have people ride through, neighbors selling hot dogs and hamburgers, saying, 'You don't got to go to Washington for cherry blossoms!'" Cheatham said this weekend from his front steps in the 1600 block of Appleton St.

The block has about 40 occupied homes, 11 boarded-up vacants, and about a dozen cherry trees — planted by the city in the 1970s, as Cheatham recalls.

As thousands traveled to Washington for the capital's Cherry Blossom Festival, Appleton Street's trees also bloomed this weekend. People were out on their porches in the nice weather and Cheatham — president of the local Matthew A. Henson Neighborhood Association — put on some jazz music and had a gathering.

"We take pictures of them every year," said Yvonne Miles, 50, who has lived on the block for the last 28 years. "They're the same trees, but fresh memories."

Some of the trees have disappeared over the years: some lost to age, one to lightning, still others to too many neighborhood kids climbing on them at once.

Even so, the neighbors enjoy the remaining blossoms together, just as they conduct neighbor watch walks together and confront young drug dealers together, Cheatham said.

Community pride comes in a lot of forms, and can have a lot of positive effects.

Miles has always thought a little color makes a difference on her block, where boarded up windows and fading paint blur into the surrounding asphalt roads, riddled with potholes.

"There are more and more vacants now," Miles said. "That's why I keep my flowers out here."

Miles was referring to the artificial flowers she keeps in large flower pots all over her porch — right now, pinks and purples and yellows for spring. In the fall, she will replace those with the autumn-colored artificial flowers that are in storage. She can reuse the fake flowers every year, and save money that way, she says.

But the cherry blossoms — they're free.

Tracey Harrell, 54, who's lived on the block for the last few years, said the cherry blossoms for her mean spring has arrived.

On Friday, she and some family and friends had crabs on her porch, just beneath one of the trees. The crabs weren't great this early in

the season, she said, but the ambience was.

Cheatham, 63, who is running for a seat in the Maryland House of Delegates representing District 40, invited members of the community out on Saturday to enjoy the cherry blossoms, sign up to vote and chat with one another. Bill Marker, also running in District 40 — he and Cheatham have formed a "diversity" slate, they say — was also there, eating a fish sandwich from a nearby shop.

About 2 p.m., a small group gathered next to a cooler of sodas on the steps. Sometimes city and state officials forget about neighborhoods like these, they said. Maybe the cherry blossoms could help draw attention to the community, possibly as a symbol of resilience.

"They come out faithfully," said one older woman, who asked not to be named and said she'd been living on the street for longer than she'd like to admit.

"If Washington gets theirs, I say, 'Well, ours will be next,'" she said.

Then she sat down with her neighbors to enjoy the day.

You don't have to go to D.C. for cherry blossoms. Here are the best spots to see them and other trees in Baltimore